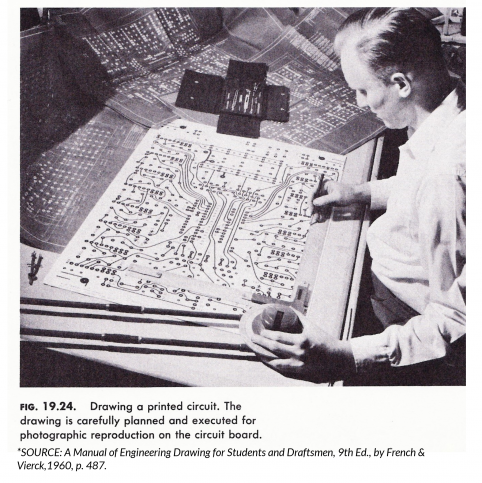 Printed circuit boards, otherwise commonly known by it's acronym PCBs -  are used in a number of electronic configurations and devices. This incredibly useful invention is as fundamental to the development of the contemporary discourse of electronic communications as is the invention of the vaccination to extending the longevity of human life expectancy.

Maybe you’ve seen a PCB in one of your consoles from the 80s, or when you accidentally broke your television remote in half – but what exactly are they and where did they come from?

What is an Electronic Circuit Board?

Electronic circuit boards are synonymous with Printed Circuit Boards – PCB’s. They are used to automatically support and electronically link elements through the use of conductive tracks, pads, and other components within copper sheets that are preserved through lamination onto a non-conductive substrate. Initially, PCB’s advanced as a mechanism for optimizing electronic manufacturing and were put together by hand. Luckily, electronic circuit board assembly has changed dramatically from when they were formally invented in 1903.

The advent and subsequent development of the contemporary PCB is defined by a rich history and speaks to the advancement of human industrialization and electronic innovation spanning nearly 150 years back. Today we’ll discuss the development of electronic circuit board assembly and expectations for the PCB in the decades to come.

The United States in the late 18th century was a much different place than it is today. Over 100 years ago, the US began to recover from the Civil War of the 60s, and the manufacturing industry was in full boom. Train tracks were constructed over hundreds of miles of the US – connecting people from east to west coasts in a span of a couple of weeks as opposed to traditional forms of transportation taking the duration of many months. The late 1800s also saw the beginnings of electrical standardization in which electricity would be brought into the common household – beginning in cities and expanding outwards to the more rural areas of the states.

It was in the early 19th century that the first PCB would be invented by German inventor Albert Hanson. Hanson’s PCB while arbitrary, was the beginning of resembling the contemporary PCB with its flat, foil conductor atop of an insulating board composed of a conglomerate of layers.  The end of the Progressive Era marked the beginning of the Roaring Twenties – a time marked by its economic boom and American migration from rural areas into urbanized cities. Department stores like Macy’s, brand-name products, and house-hold appliances like washing machines and refrigerators began to permeate the materiality of the American dream. Halfway through the Roaring Twenties in 1925, Charles Ducas invented and patented a configuration in which conductive constituents would connect to an insulating material. Ducas’s patent would later pave the way for the invention of the Printed Wiring Board (PWB).

The Great Depression of the 30s was a sorrowed time for the American psyche. Stock markets were down, banks were failing, and unemployment rates had dropped to an all-time low. The rise of fascism took advantage of this time and would be predicative of future world conflict. Innovations with OCB development were stagnant at this time due to the depressive state of the American economy.

The rise of fascism would lead to World War II, with the United States formally entering the war after the bombing of Pearl Harbor in 1942. US participation in the war necessitated the invention and streamlining of US intelligence and communications, bringing the utilization of electronics to the forefront of their initiatives. As evident in the utility in the invention of Morse code, it was also during World War 2 that the first communicative application of PCBs, were used for automating high-velocity artillery shells – programmed to consistently fire over large distances on either air or land.

Austrian-born Paul Eisler invented the printed circuit in 1943 when he took out a patent for utilizing printed circuits in a number of electronic applications. His invention included the insulating layer of the PCB with copper found on top or bottom. Later, the American military would work on Eisler’s initial invention to release a set of classified PCBs.

After World War 2, Americans began to see fundamental improvements to their household appliances. With the end of the Great Depression, Americans were able to participate in the revival of the American economy by purchasing these appliances for use in their homes.

The Cold War marks an era defined by considerable tension between the US and the USSR. These two global super powers were at odds in their battle to defend their political discourse on communism versus capitalism. While on the brink of sparking World War 3 and signing off on mutually assured destruction, each superpower sought the need to establish highly effective communication initiatives – just as the US had in World War 2. It is here in each power’s need to stay one step ahead in the stockpiling of arms, that the full potential of PCBs was realized. In the late 50s, the US army released a patent for the “Processing of Assembling Electrical Circuits”, allowing American manufacturers to create electronics that could institute connectivity between different elements with copper traces.

The Advent of the Microprocessor, The Digital Age, and the Invention of the Internet (1970-1990)

In 1958 the first microprocessor, in its more primal form, of the integrated circuit (IC) was invented by Jack Kilby. But it wasn’t until the 70s that he would share his invention with others resulting in the first IC’s integration into the manufacturing of electronic circuit board assembly.

The 80s are known for big hair and large digital advancements. The way in which Americans consumed media changed fundamentally, with personal electronic devices like the Walkman, CDs, the VHS, the camera, and gaming consoles as definitive electronic markers of this era. Previously, PCB design consisted of drawing by hand and utilizing stencils and a light board, but with the invention of computers and EDA – software was developed to completely transform the way in which Americans would design and manufacture electronics.

The 90s saw the utilization of silicone in electronic applications as the new norm. It was also in this decade that the ball grid array (BGA) is introduced, which allowed for more gates to fit onto a singular chip and for memories to be embedded with the systems chimp simultaneously. While the 80s was defined by big hair the 90s in contract, was known for the miniaturization of electronic devices – computers which took up entire rooms and floors would begin to decrease and size. Compact electronic devices became the new ideal.

The age of hand-held, portable phones – and later the smartphone are definitive electronic markers for the era we are currently in. Along with the standard compact electronic devices established in the 90s, the new expectation is that one device should be able to meet user needs in multiple ways. Previously, you would have multiple devices to fulfill a singular utility i.e. calculators, cameras, calendars, etc. The 2000s solidified the ideal of having one device for multiple uses as the new norm. Today your smart phone is capable of acting as your calculator, calendar, navigator, camera, bar code scanner, flashlight, and much more. The consolidation of devices will likely continue to stand as universal expectation as technology continues to develop – with electronic circuit board assembly developing in direct response to the direction of technological innovation.

Interesting read about the historical context that paved the way for the contemporary applications of PCBs!
Posted by: Samantha | February 7, 2019, 2:07 pm
Post a Comment
*** Your email address will not be published.
Request a Quote